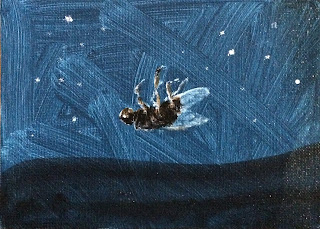 I painted this particular Dead Fly on February 22, 2017. This was the day it was announced that NASA had discovered seven Earth-like planets just forty light years away. I wondered if they had flies on them. A friend of mine commented that the head of the fly looks like a space helmet and that the light reflected on it looks like the light that reflected on the helmets of the first astronauts that went to the moon. I wasn't thinking about that when I painted it.
I hope that the fact that some of these Dead Fly paintings are painted on cheap canvas-board that I bought at Michael's (arts and crafts store) doesn't cheapen the overall project or the art. Back when I was in art school one of my professors said that we should be able to destroy any art that doesn't quite work - in other words, is not good art. I chose not to pressure myself into turning out a masterpiece each time I had an idea, so chose at times to just knock one off on a cheap substrate.

Posted by Beverley Conrad at 3:38 AM