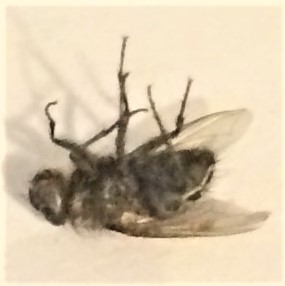 One day I went up to Greg’s office to get an envelope. There was a dead fly lying on a manila folder on top of the file cabinet. The light was hitting the fly in such a way that it cast extraordinary shadows of the fly, its wings, and its legs. I took three pictures of it from different angles using my cell phone. They’re not the best pictures but I figured at some later date I would include the dead fly in my vermin series. I’d actually rather work from bad photos when creating art from a picture of something. I don’t like to get bogged down in details but prefer to go with the flow – design and color.
The Vermin series was a series of paintings I started one day when Greg was in the garden trying to chase out a groundhog. 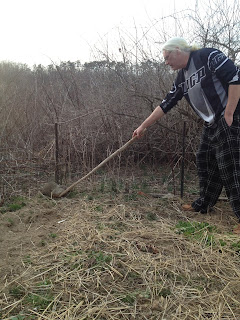 Our dog, Mwayla, was barking at it. The groundhog was really pissed off at the two of them and made a mean face. 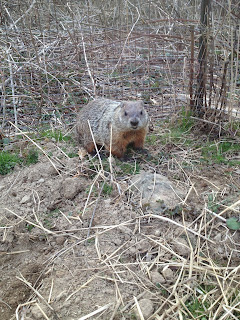 I took a picture, then went in the house and painted it in oil on canvas. It was a really quick painting – wet on wet. I had had this idea to do a bunch of paintings of vermin really quickly and sell them on line for maybe twenty bucks or so. I figured if I painted fast enough I might be able to do one a day and make some spare cash. As it was the painting turned out pretty nice so I didn’t want to sell it for any twenty bucks although several people said they give me that much for it. My vet offered thirty. 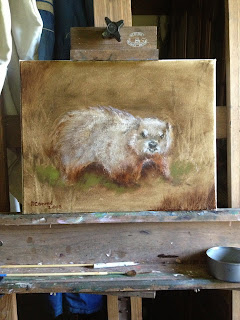 We had a couple of possum pestering our garden and set a live trap to catch them. Caught a couple. Each time I took a picture and went in and painted it thinking I'd sell it for twenty bucks but each time they came out pretty nice, so I decided not to sell them just then – at least not for any twenty bucks. 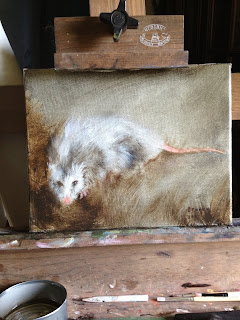 On it went.  Rabbits. Snakes. Squirrels. I started taking pictures of anything that showed up that was considered a vermin. And then there was the Dead Fly. So I painted a picture of the dead fly. Little oil painting on canvas 5”x7”.  Stuck it up with the rest of the paintings. 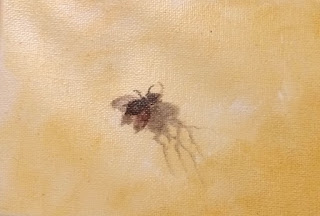 Oh! The reason I decided to paint the vermin, other than just as a money maker, is because many times when an artist stands in front of a blank canvas or piece of paper they just don’t know what to paint. At least that problem was solved. I’d just focus on vermin for the time being. I used to paint portraits. Still do, sometimes.  But there aren’t a whole lot of people who feel like sitting for one any more. And anyways, I needed to branch out.
Then one day my son was home with a friend of his and he saw the painting of the dead fly. Mind you, when he’s home he sleeps in his old room which I was going to turn into a studio but actually prefer to paint in a corner of the kitchen. But all the vermin paintings hang on the walls of his room. He saw the dead fly and said he really liked that one. So I thought – OK, you’re getting that one for Christmas this year. So then when my daughter saw that he got a dead fly for Christmas she said, "Oh Man ! I want a dead fly!"
So I figured I better do another one. So I did. 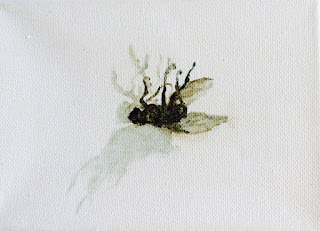 But this one came right on the heels of Michael Flynn getting bounced out of Trump’s Whitehouse and I named it "Flynn" – dropping like flies was the joke and the hope. Ran in up the flagpole on Facebook. WTH.

So a friend who is a writer from upstate New York messages me and says, "Hey if you’re into dead flies, Sal wants me to clean out some light fixtures today. I’ll send you anything I get." So I write back and say "No! We don’t need any extra flies, dead or alive, here in Pennsylvania. Write me a story instead." So he did.
Two days later I get this crazy whacked out story in my e-mail about a crazy whacked out woman who paints dead flies. That's it. Dead flies day in day out. She paints one hundred of them. Till one day she has a big art show in Manhattan and someone – a guy from Saudi Arabia -- comes in and buys the whole show. He buys ninety-nice works of art depicting a dead fly. He can’t buy number one because that one is missing because her son owns that one. But anyways, he smacks down $750,000.00 for the entire collection.
So when my husband got home from his gig that night, we were sitting at the kitchen table and I was telling him about this whacked out story that our friend Dennis wrote and I say, "Yeah. Can you just see that? Sign on the street pointing to a gallery opening of a show called Dead Fly. Like who’d ever go see that?" And he says, “I would.” "Seriously?" "Yes, I would." Then we got thinking – maybe I should do just what the woman in the story did and see where it goes. One hundred works of art of a dead fly.
So now I’m well past the half way point. The flies are buzzing around my studio and I'll carry on till I have one hundred done at which point I’ll hit up a gallery in Manhattan and see if they want to do a show.
Here’s the kicker. I re-read the story a few days ago and see that actually I had it all wrong. The woman in my friend's story only does thirty dead flies. And she nickel-dimes her paintings on FB for a quick buck. And there was no guy from Saudi Arabia. And there was no $750,000.00 pay off.
I like my story better. So that’s where this is headed.

As of September 7, 2018, I have done 64 dead fly works of art. I will now start posting each dead fly in the order of its creation with a little blurb about why I did it. Please follow this blog and if you know of any gallery owners in Manhattan who would like to have a show of the completed works, feel free to share. I'm game. Thanks!

Posted by Beverley Conrad at 4:38 AM