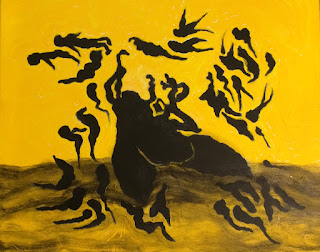 This is another one that can be flipped upside down for a different feeling. It is what it is - Dead Fly rising from a sea of pestilence. Dead Fly falling from a sky of pollution. Black and yellow are the colors used for the contagion flag for ships at sea. In port, it means quarantine. This one is kind of scary and I was in a dark mood when I painted it. You can use your own imagination to see what you want. 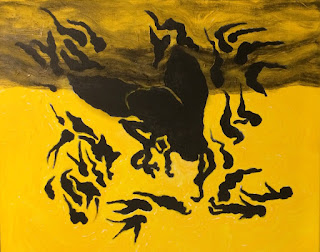 Posted by Beverley Conrad at 5:09 AM 3 comments: 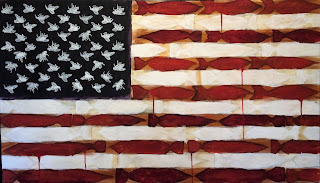 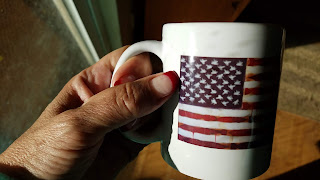 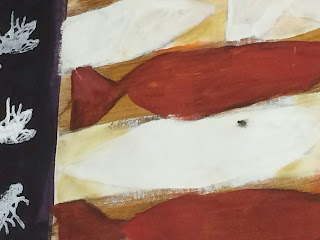 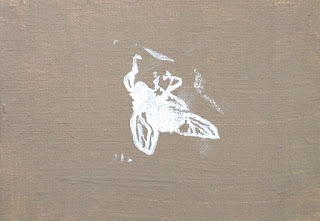 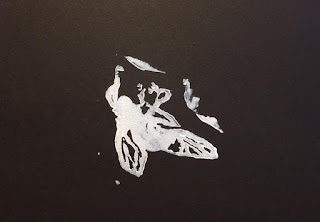 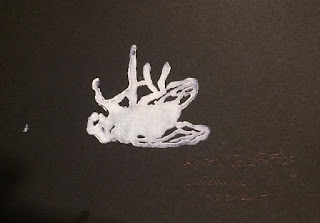 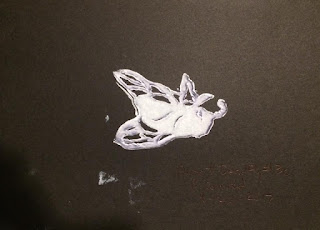 I needed to see how each of the stamps I carved would work out when using the printers ink which actually was an acrylic paint used for this purpose. Here are the results. The first one, Dead Fly 27, was done on a small canvas board. It came out okay and since it is part of the Dead Fly project I decided to number and keep it. The other three Dead Fly pieces are printed - sampled actually - on black card stock. I wanted to see how they worked out light on dark.
Although the first one, Dead Fly 27, will stand on its own once it is nicely framed, I think that the next three would work as a nice grouping on a wall if one is so inclined.
Coming soon! Dead Fly 31 - a major work! 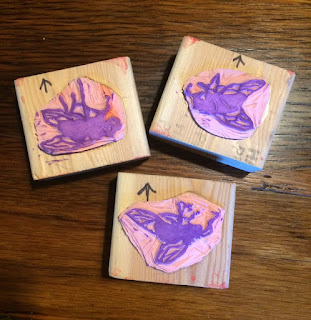 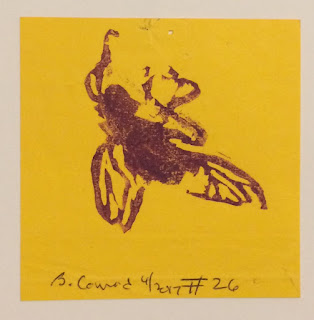 Part of the artistic process: here are three linoleum cuts of the three views of the original dead fly. It took some time, as well as figuring out how to make a stamp that would work for the larger piece I had in mind.  I hadn't done any linoleum cuts for years and actually found the process very relaxing, almost Zen-like. The vinyl cut easily and the little tool set I got at Michael's Art Store worked very well. I needed fifty dead flies for the large piece and figured stamping the canvas would work better than trying to paint each dead fly free hand. Then of course, I had to figure how to make a working stamp for this. Using contact cement I glued the cuts to blocks of a 2"x 4". Then did a sample and thought, Hm, that looks pretty good! No sense throwing it away. It is what it is - the first proof for the larger piece. Matted and framed it will look great! Might try using the stamped print on clothing at some point. 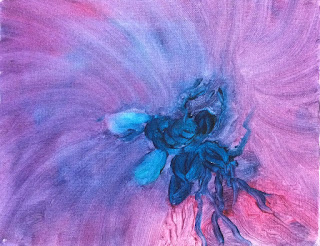 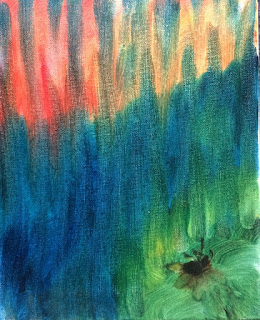 I did these on Easter Sunday in 2017. I don't go to church as a rule, and don't see much sense in buying fancy clothes. We used to color eggs but now I don't see much point in that. I always thought that as an adult I'd be able to color really masterful eggs, but my patience is thin in that respect, so they never quite worked out. No one ever said WOW! WHAT AN EGG! On the other hand, I wanted to color something and I must have been home alone this particular Easter Sunday or I wouldn't have painted. So here they are for what they're worth - a couple of Easter Dead Flies, loose paint on canvas, one session a piece, bright colors, the challenge being to keep the paint, wet on wet, clean and not to let them turn "muddy." The challenge with Easter Eggs is the same. You've all those pots of colors and dip dip dip - and sometimes there's always one or two that end up looking like an overcooked yolk. 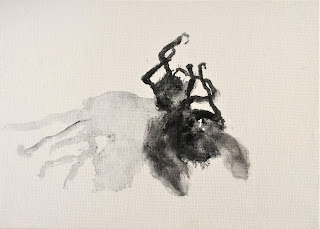 This is just a quick study mostly to see if I could do it and not mess up, not overwork it. The date on the back of this one is March 15, 2017. This means we probably had the pellet stove going to heat the kitchen - which is where I work - and any sort of water soluble paint would dry quickly. So you can see, this is a really fast study of the dead fly. There's no erasing with such a painting. And one must know when to stop. Unfortunately, after completing this one I stuck it up on top of a cupboard and had it half covered with probably the next one and cooking, wood, smoke - who knows what - created an awkward staining on it. It yellowed some and not in a good way. I might have to salvage this one by mixing up a light wash and touching up the background. Sigh. After seeing what happened with careless handling, I am being more careful now. Live and learn.
Posted by Beverley Conrad at 5:58 AM 1 comment: 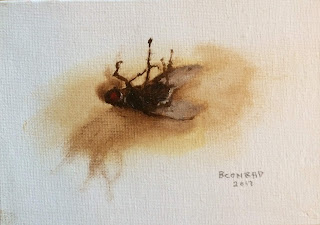 After struggling with the "Rembrandt" dead fly (#21) for way longer than I should have - seriously - I should have just tossed that one out the window - I wanted to see what would happen if I took the left over paint that was on the pallet and just knocked one off lickity-split without putting too much thought into it. Also, wanted to just work wet on wet, no layers, no glazes. This is one of my personal favorites. It's nicely colored, didn't go muddy, spontaneous, well-formed, and has rhythm to the composition. Took ten minutes. Sigh. Oh, well, the more dead flies I do, the easier they'll get to do.
Posted by Beverley Conrad at 4:57 AM No comments: 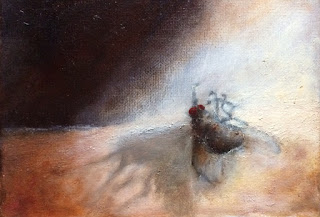 I started this one with the grand delusion that I could paint a "Rembrandt style dead fly using old master oil paints, glazes, and that sort of thing. I've done old style oil paintings before and just felt like trying the same techniques using the dead fly as the subject. Meh. Not sure if it worked, but here it is. It's not the best photo. If I get around to getting a better picture I'll post that instead. This painting took a long time to do. Longer than should be but most likely because I didn't quite know what I was doing, where to go with it. Also, it was humid and the paint took a long time to dry between sessions. That kind of fuzzes up direction when working on a piece.
Posted by Beverley Conrad at 4:50 AM No comments: