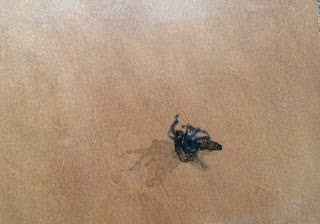 Politics reared its ugly head in this piece. Shawn Spicer had just resigned (or had been fired) from his job as Trump's White House press secretary and I saw Spicey, as he was affectionately referred to on social media, as another fly to drop. Dropping like flies. Yes, they are.  It's painted on a piece of maple veneer plywood because it's likely what the press secretary's podium is made of. It's dated July 31, 2017

Posted by Beverley Conrad at 6:03 AM