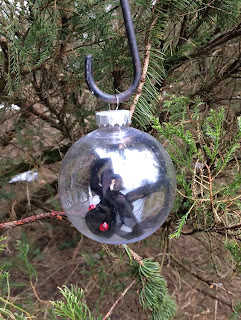 It's hard to see the full beauty of this little gem given the reflections in the acrylic ball that the Dead Fly resides in. Had an idea to make a Dead Fly Ornament - or even a set of a dozen! and create this. The idea was in my mind but the original attempt at it didn't work out. I had tried to make it out of pipe cleaners then stuff it into the ball which only has a half inch opening at the top. The pipe cleaners got all smashed up and being pipe cleaners didn't spring back into shape. I needed something soft and pliable that could be squished through a tiny hole and open back up. I found an old Halloween costume head band in a dresser drawer here at the house. It was a spider. Then I cut off tow legs, pulled out a bunch if the stuffing, made some wings out of Contact paper (the frosted stuff) and Voila! It worked. Kind of like a ship in a bottle. Maybe.
Posted by Beverley Conrad at 4:24 AM