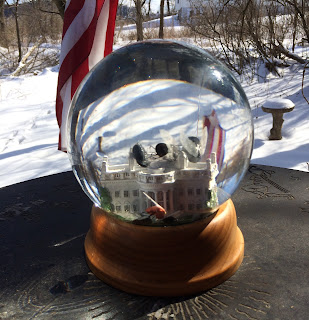 Dead Fly #45 took a lot of engineering to actually create. As rapidly as people are coming and going from the current administration, I kept having an image of the White House and those in the administration "dropping like flies." After all, it is the cliche we use when people come and go quickly. It is an acrylic globe 6" in diameter filled with a solution of mostly glycerin and some water. The dead flies are made of Fimo and wire. I used cellophane packing tape for the wings but after trying them out in the glycerin, realized that the wings became invisible. Off to Dollar General for translucent nail polish! That worked. I needed the heavy solution of glycerin so that the flies would float and fall slowly. I did not make the White House but sent for one off Amazon and a friend of mine with a belt sander, ground it down so that it would fit inside the opening to the globe.
Now - how to get it inside the globe and create a stopper? I went to Resilite athletic mat making factory in Sunbury, PA and they gave me a scrap of resilite from the dumpster. I found the already made wooden base at a thrift shop in Mifflinburg, PA. It had a winter scene in it, but I only needed the base so broke it. I lucked out and found a threaded cap that fit the threads of the acrylic globe which is actually a lamp globe (again - Amazon)
Once together it took a LOT of work to keep it from leaking but eventually with the help of a friend - the one with the grinder - we were able to figure it out. It looks great in action! Tip it upside down and the flies drop like flies. A statement on the current administration.
Posted by Beverley Conrad at 9:12 AM